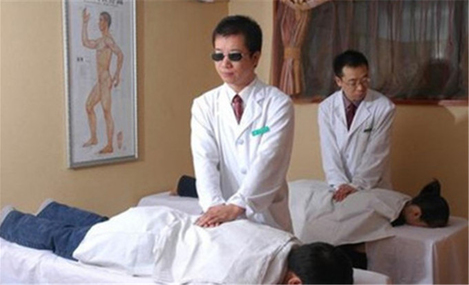 I watched a movie called Blind Massage in 2014. It narrated the helplessness and bitterness of the ordinary life of blind people. So I started trying to understand and focus on this group. Many visually impaired persons usually learn the skill of massage to make money as a masseur or masseuse. Whenever I talk to them, I hear their sadness about they cannot obtain higher education. If they have a chance, they would never choose to be a masseur.

In life, there is a lot of time, they do feel abandoned by society. Maybe because of the imperfection of assistive technology; maybe because of lacking access to higher education. They think that they cannot engage in the normal society totally, especially the digital literacy as an important part of education in the contemporary. Once they graduated from junior middle school (nine-year free compulsory education), many of them have to learn massage skills to make a living. They have fallen far behind others in the traditional education system, and moreover, how can they have the opportunity to learn digital literacy？

Although we often appeal for respect and protect minority rights, their situations would scarcely be improved completely.

As Gomez K, Barron B, & Pinkard N, mentioned that the ways that technologies are used have been shown to vary by family income, age, ethnicity, gender, education level, and geographic location(Introduction: The Digital Media Landscape, P5.)

Actually, I think that class solidification (class stratification) is a problem. The so-called Matthew effect—that is, the rich get richer and the poor get poorer—has been amply documented in educational settings (Adams 1990; Rigney 2010; Stanovich 1986). It is not hard to find that the gap between elite and mass education and between universities in the developed and developing world is likely to widen, especially people are in some countries, learning/examination (exam-oriented education system) is the only way to change their destinies. They don’t have any opportunity and environment to discover their true passion. Rich people have more resources for their children to nature digital literacy.

Sometimes, when I communicate with my Chinese friends, a weird/ironical feeling between us is that I might become a member of “people with a vested interest.” I have the opportunity to study abroad and obtain different learning skills. But they have to stay an unalterable life. If I share something new especially the new technology that I learn from my major, they might not fully understand. On the one hand, everybody knows that ensuring equal rights is very important, on the other hand, “the divide between the more and less literate grows wider” (P7)

View all posts by Jiayi Liu